check out official trailer of the Steve Jobs‘ movie starring Ashton Kutcher. the movie details Apple‘s Steve Jobs’ ascension from college dropout into one of the most revered creative entrepreneurs of the 20th century.

for all PINOYs who aren’t familiar with the CEO of Apple, here’s a summary profile of Tim Cook as seen on Apple.com

Before being named CEO in August 2011, Tim was Apple’s Chief Operating Officer and was responsible for all of the company’s worldwide sales and operations, including end-to-end management of Apple’s supply chain, sales activities, and service and support in all markets and countries. He also headed Apple’s Macintosh division and played a key role in the continued development of strategic reseller and supplier relationships, ensuring flexibility in response to an increasingly demanding marketplace.
Prior to joining Apple, Tim was vice president of Corporate Materials for Compaq and was responsible for procuring and managing all of Compaq’s product inventory. Previous to his work at Compaq, Tim was the chief operating officer of the Reseller Division at Intelligent Electronics.
Tim also spent 12 years with IBM, most recently as director of North American Fulfillment where he led manufacturing and distribution functions for IBM’s Personal Computer Company in North and Latin America.
Tim earned an M.B.A. from Duke University, where he was a Fuqua Scholar, and a Bachelor of Science degree in Industrial Engineering from Auburn University.

here are other intriguing details of Tim c/o gawker.com

Temperament: Calm, quiet — and deadly. His southern accent and “courtly demeanor” can disarm subordinates, and Cook never raises his voice, but his default frown and long, uncomfortable silent stares hint at the demanding leader underneath.

Work habits: Voracious. Cook is described as a workaholic who begins emailing his underlings at 4:30 am each morning and eschews Apple’s famously good cafes for an endless series of energy bars, which he’ll often devour during meetings. The COO prides himself on being the first into the office and the last one out.

Shortcomings: Cook is not known as a product visionary or for shepherding projects through Apple’s rigorous development pipeline.

Interests: Cook is a “fitness nut,” in the gym by 5 am, often on the hiking trail and even more often on his bike.

Social style: Cook is relatively withdrawn. A former college classmate described him as “not a real social person..”

Romantic interests: After Cook was profiled as a “lifelong bachelor” and “intensely private”

Signature look: Cook serves on Nike’s board, which is why you’ll see him sporting Nike shoes under his jeans around the Apple office. 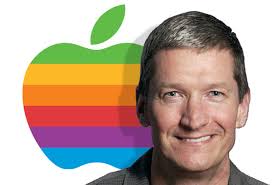 a day after Steve Jobs resigned as CEO of Apple, his replacement Tim Cook, steps up reassuring Apple employees that the company shall maintain its course – forging ahead. check out his email c/o ars technica.

Team:
I am looking forward to the amazing opportunity of serving as CEO of the most innovative company in the world. Joining Apple was the best decision I’ve ever made and it’s been the privilege of a lifetime to work for Apple and Steve for over 13 years. I share Steve’s optimism for Apple’s bright future.
Steve has been an incredible leader and mentor to me, as well as to the entire executive team and our amazing employees. We are really looking forward to Steve’s ongoing guidance and inspiration as our Chairman.
I want you to be confident that Apple is not going to change. I cherish and celebrate Apple’s unique principles and values. Steve built a company and culture that is unlike any other in the world and we are going to stay true to that—it is in our DNA. We are going to continue to make the best products in the world that delight our customers and make our employees incredibly proud of what they do.
I love Apple and I am looking forward to diving into my new role. All of the incredible support from the Board, the executive team and many of you has been inspiring. I am confident our best years lie ahead of us and that together we will continue to make Apple the magical place that it is.
Tim

Steve Jobs, the main man behind Apple, has just filed his resignation and will be replaced by Chief Operating Officer Tim Cook.

last seen on Apple’s WWDC, Steve did not mention if the cause of his decision was his health (he was suffering from cancer and has been on on medical leave since january).

here’s steve’s resignation letter.
“To the Apple Board of Directors and the Apple Community: I have always said if there ever came a day when I could no longer meet my duties and expectations as Apple’s CEO, I would be the first to let you know. Unfortunately, that day has come.

I hereby resign as CEO of Apple. I would like to serve, if the Board sees fit, as Chairman of the Board, director and Apple employee.

As far as my successor goes, I strongly recommend that we execute our succession plan and name Tim Cook as CEO of Apple.

I believe Apple’s brightest and most innovative days are ahead of it. And I look forward to watching and contributing to its success in a new role.

I have made some of the best friends of my life at Apple, and I thank you all for the many years of being able to work alongside you.

undoubtedly, Steve is the reason why Apple is the Apple we know today. he co-founded Apple in 1976 from his family’s garage with Steve Wozniak. due to some disagreements, he left Apple and returned in 1996 as consultant and in 2000 he took the CEO role permanently.

thought he really need to rest for now, who know he might be back soon!  good luck to the next leadership team, lets see where Apple would go after this.

Apple’s Steve Jobs’ vision does not end with WWDC 2011’s Mac OS X Lion, iOS5, and the iCloud, he also plans to build a campus on a 150-acre property in Cupertino
the proposed Apple facility would be pretty much like a spaceship and would house around 12000 people, with it’s underground parking and “energy center,” it promises to be a zillion times better.
Jobs said, “We’d like to continue to stay here and pay taxes. Because if we can’t, we have to go someplace like Mountain View.”
seems like this will have a shot to be the best office building in the world, certainly looks like “the mothership has landed in cupertino.”

IT PINOYs got what they were expecting from this year’s Worldwide Developer’s Conference 2011 (WWDC 2011) with the launch of three main Apple product – Mac OS X Lion, iOS5, and the iCloud.

Steve Jobs looked very thin (quite sad) but he sounded  strong as ever!

iOS 5 – includes more than 200 new features for your iPad, iPhone, or iPod touch.
iCloud – this is the cloud the way it should be: automatic and effortless. iCloud is seamlessly integrated into your apps, so you can access your content on all your devices. And it’s free with iOS 5
see more of Steve Job’s keynote live blog via [mashable.com]
IT PINOYs wait is over, Apple’s Steve Jobs just announced the release of the much-anticipated iPad 2 slated by March 11.
here’s some key features:
iPad 2‘s all new design will definitely be “less in your hands, more at your fingertips!”
one of the top tech buzz this week came out claiming that Apple’s big man, Steve Jobs, has only six weeks to live – this seems to be all but a rumor.
RadarOnline.com has confirmed Steve has been undergoing treatment at the Stanford Cancer Center in Palo Alto, California, and his recent photos was further sensationalized in The National Enquirer.

all IT PINOYs just say,

you are probably well aware now that Steve Jobs have decided to step down as Apple’s CEO late last week. this prompted me to do some research about Steve Jobs as i’ve heard so many great (and not so great) stories about him.

in his 2005 Stanford commencement speech he best summarized his life in three stories: connecting the dots, about love & loss, and finally about death. one that struck me most and i hope my fellow IT PINOYs would always remember was what he said about life and love for work:

“Sometimes life hits you in the head with a brick. Don’t lose faith. I’m convinced that the only thing that kept me going was that I loved what I did. You’ve got to find what you love. And that is as true for your work as it is for your lovers. Your work is going to fill a large part of your life, and the only way to be truly satisfied is to do what you believe is great work. And the only way to do great work is to love what you do. If you haven’t found it yet, keep looking. Don’t settle. As with all matters of the heart, you’ll know when you find it. And, like any great relationship, it just gets better and better as the years roll on. So keep looking until you find it. Don’t settle.”

check out the complete speech [here] or watch and be amazed with the man behind Apple’s renaissance.